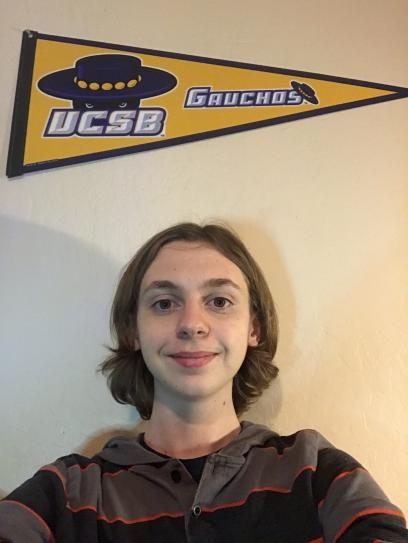 For my programming project, I chose to revisit a game I had played with before this class called Quantum Game. I’ll be showing my attempts to model qubits in this game. 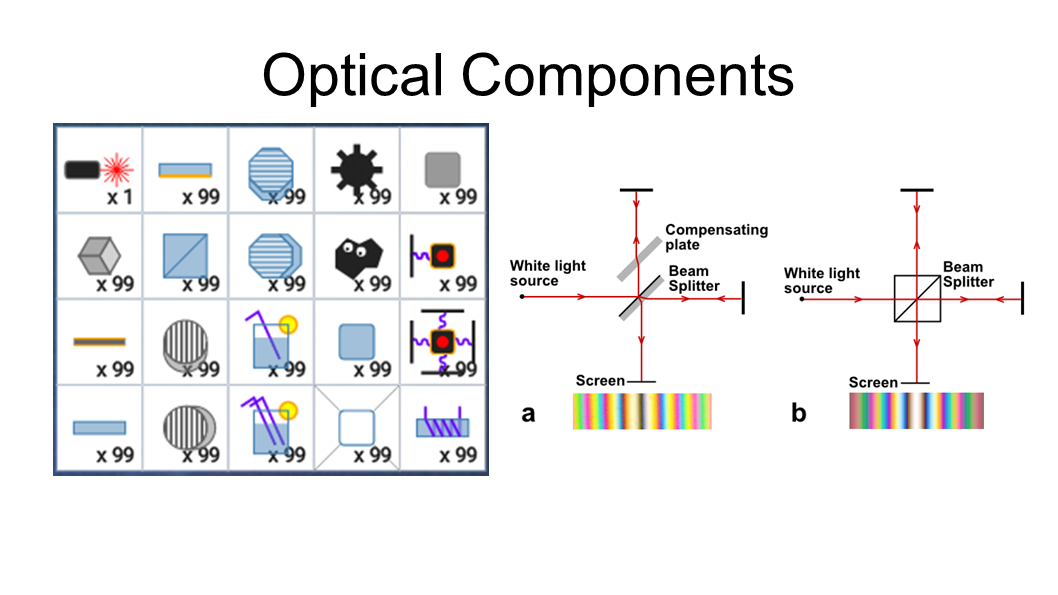 Quantum Game is a puzzle game based on photons and their interactions. It models the amplitude, phase, and polarization of a single photon as it passes through optical filters, allowing it to split into superpositions and interact with itself. The game teaches the player about phase, polarization, and interference through a series of puzzles.

There are two versions of the game. The one I used for this project is the beta version. As of this year, there is a new, rewritten version being developed with an updated user interface, but I found that it didn’t work as well as the old version for my purposes. 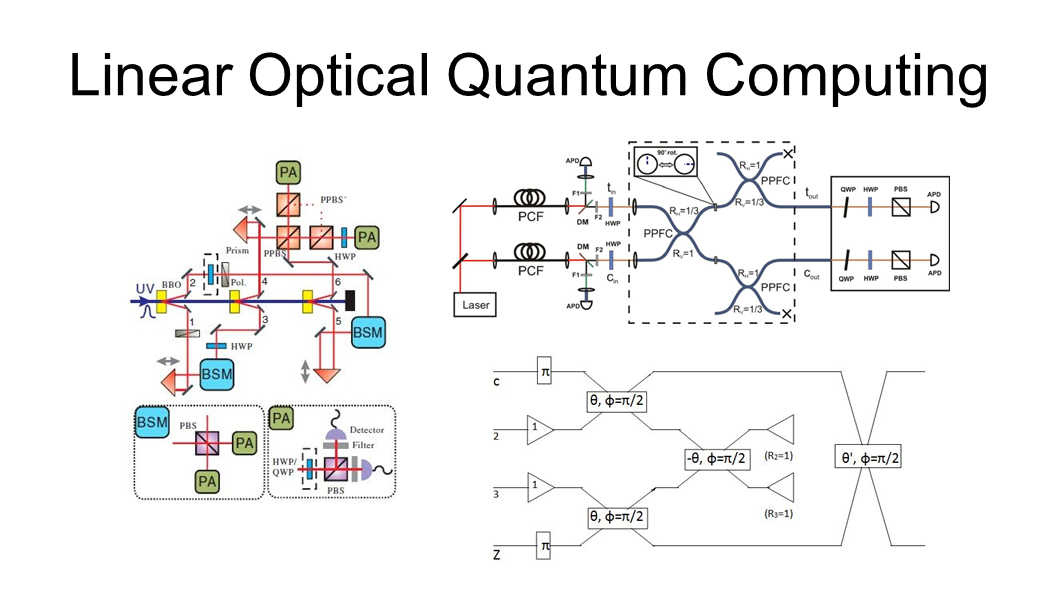 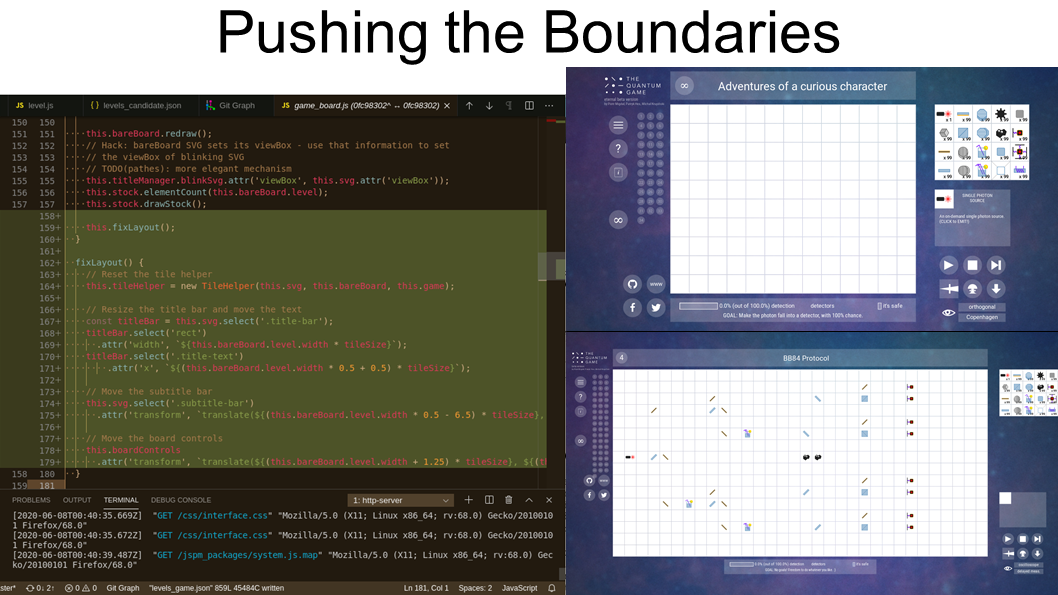 From my prior experience with this game’s sandbox mode, I knew that I would need more space than the 13 by 10 grid it provides. This is where the programming part of the project enters the picture.

The game is written in JavaScript, including an interface built with D3 and a custom tensor engine. The engine works fine with an increased board size, but the user interface does not move properly with the board, for instance making it impossible to press the Play button. I added some code to fix the UI positioning. There are still some limitations with the overall scale and the animation canvas, but I was able to increase the board size to 32 by 16. 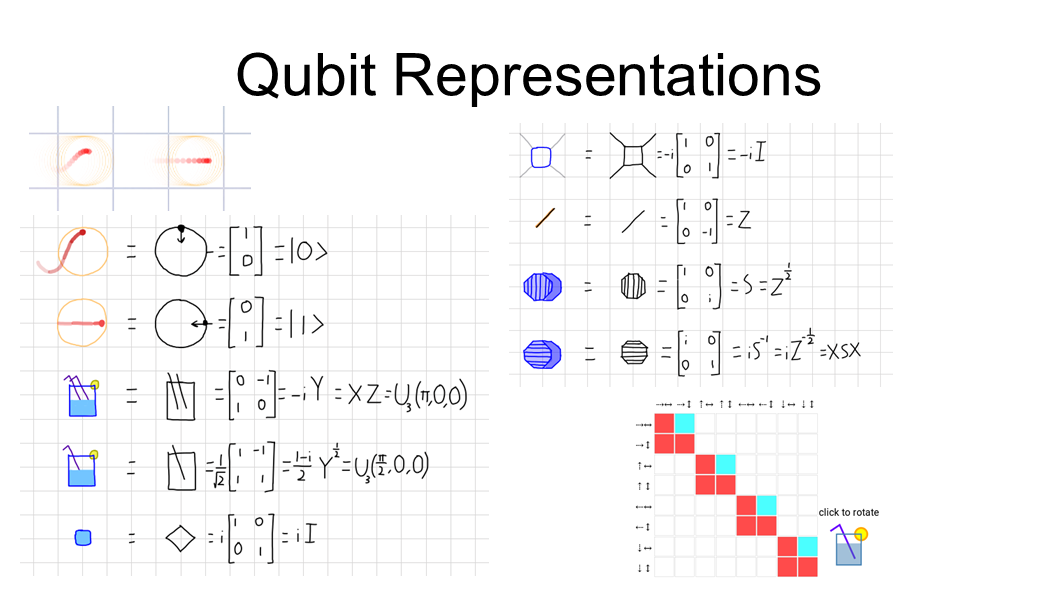 My next task was to work out the math for the qubits. While I’ve previously struggled to understand the math behind this game, this time I had a better understanding of matrices. There are multiple representations to use for a logical qubit, but the one that I chose to understand the gates is polarization and phase. I chose these two states to be the |0> and |1> states.

One nice feature of this game is the encyclopedia, which includes a representation of the matrix transformation for each element. I found that the sugar solutions apply a Y rotation with a phase shift. The quarter-wave plate is just a phase shift, which is useful for counteracting the phase shift of the other gates. A diagonal mirror is useful for changing the direction and also happens to apply a Z gate. The polarized quarter wave plates are useful for creating a Z rotation without changing the direction. 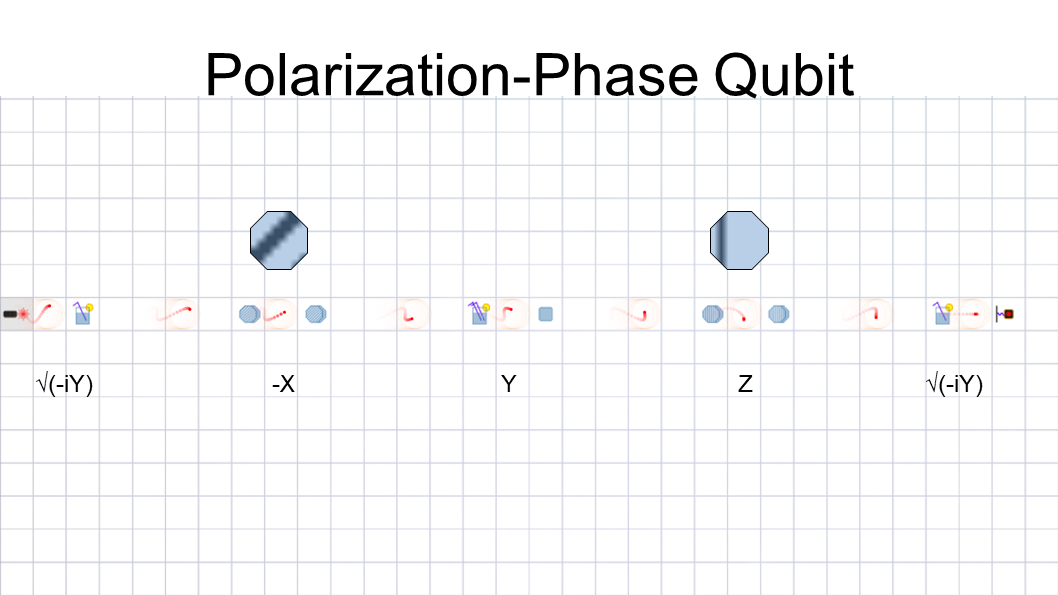 I attempted to recreate X, Y, and Z gates using three different representations of logical qubits. I made some mistakes with the phase here and there, so I’ll point those out. This first representation is the polarization-phase qubit, which I used in the last slide. We can use a sugar solution to perform a sqrt(Y) rotation with a phase shift, giving us a superposition of |0> and |1> states somewhat similar to a Hadamard gate. Next, we perform a X gate using a diagonally polarized quarter-wave plate, although I chose the wrong diagonal so it adds a phase shift. Next, we use a sugar solution and a quarter wave plate for a Y gate, then a vertically polarized quarter-wave plate for a Z gate. Finally, we use the same sugar solution as at the start to move it back into the logical basis, although with the phase shift, it ends up as a |1>. 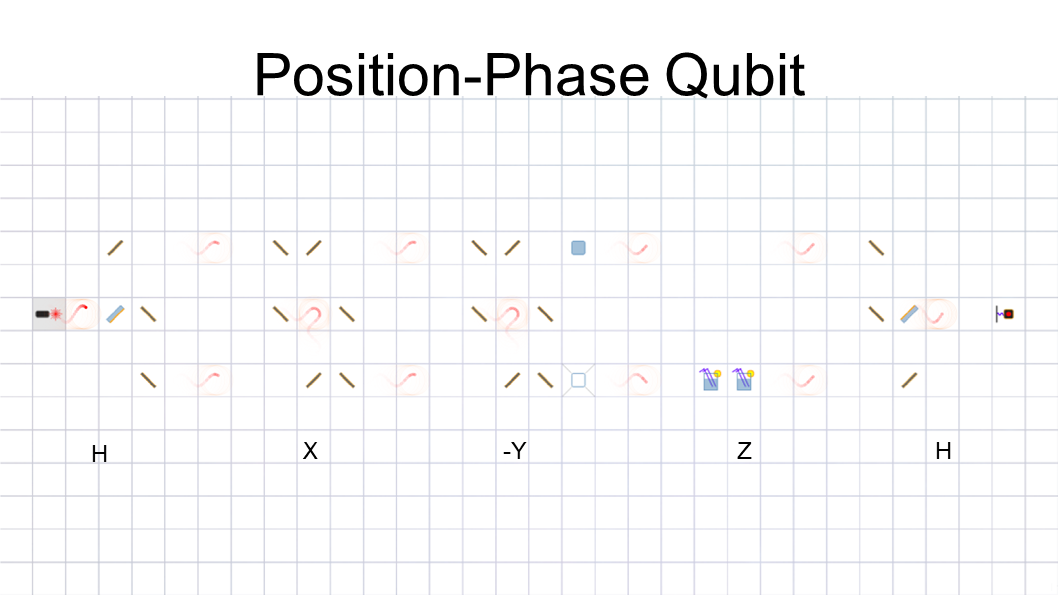 Next, we’ll look at the position-phase qubit. We apply a true Hadamard gate this time using a coated beam splitter and some mirrors. We perform an X gate by simply swapping the positions with mirrors, which has no effect on the |+> state. Then, we create a negative Y gate using an X gate and some phase shifting. If I had swapped the quarter-wave plate and the vacuum jar, it would’ve been a positive Y gate. The Z gate is simply a phase shift, which we perform using two double sugar solutions instead of four quarter-wave plates. Finally, we apply the Hadamard gate again to get a logical |0> state with phase shift. 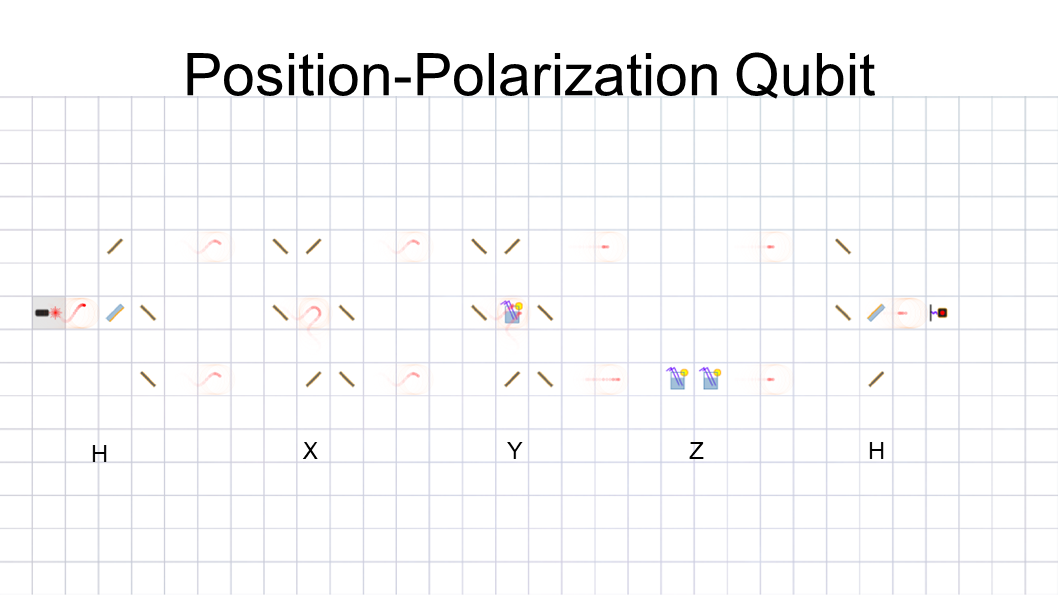 I also implemented a somewhat unconventional logical qubit using position and polarization. The polarization and phase are mathematically similar, so I figured I’d give it a shot. This setup is similar to the last one, except we use sugar solutions in place of quarter-wave plates. For the Y gate, we can put the sugar solution in the center since one of the qubits has a temporary Z rotation from the mirrors. I may have gotten this one right, but it’s hard to tell since both phase and polarization can negate a qubit. 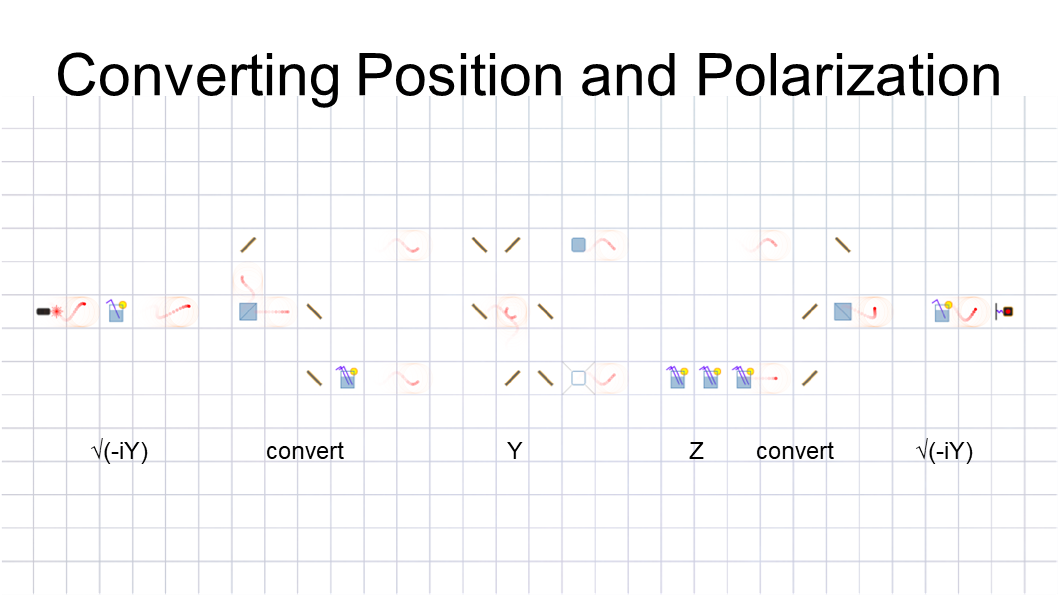 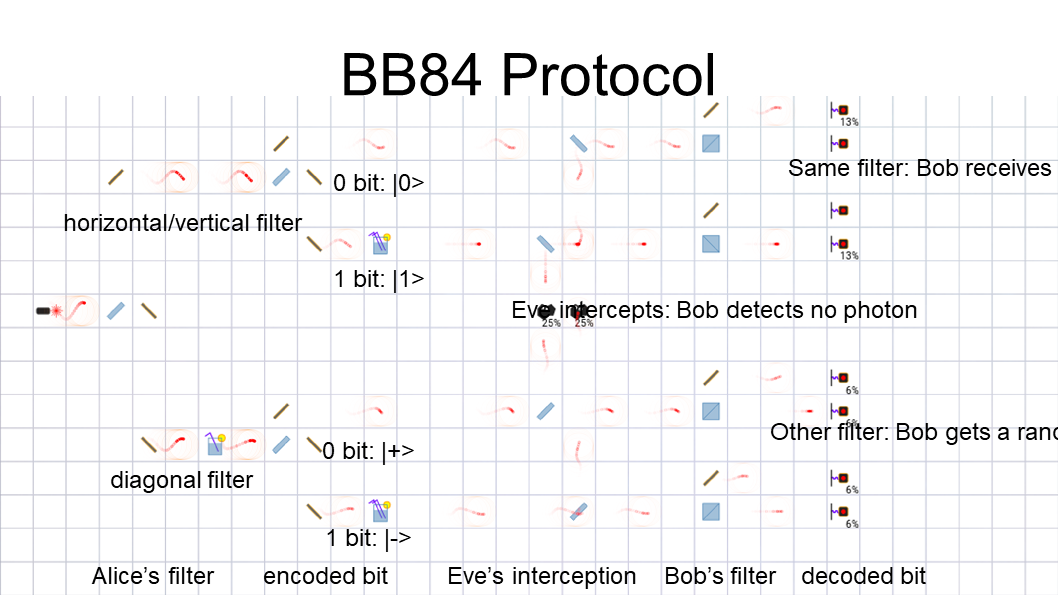 So far, we’ve been looking at rotations on one qubit. One last interesting thing we can do with a single qubit is demonstrate the basics of the BB84 protocol. Alice wants to send a bit to Bob while preventing Eve from intercepting it. Alice chooses either an orthogonal or diagonal filter at random and polarizes her photon in one of two directions accordingly. Bob also chooses a filter at random and can detect the encoded bit using two detectors and a polarizing beam splitter. Alice and Bob compare filters after the photon is received. If Alice and Bob choose the same filter, Bob receives the bit. If they choose different filters, Bob measures a random bit. If Eve intercepts the photon, Bob detects no photon and can notify Alice. 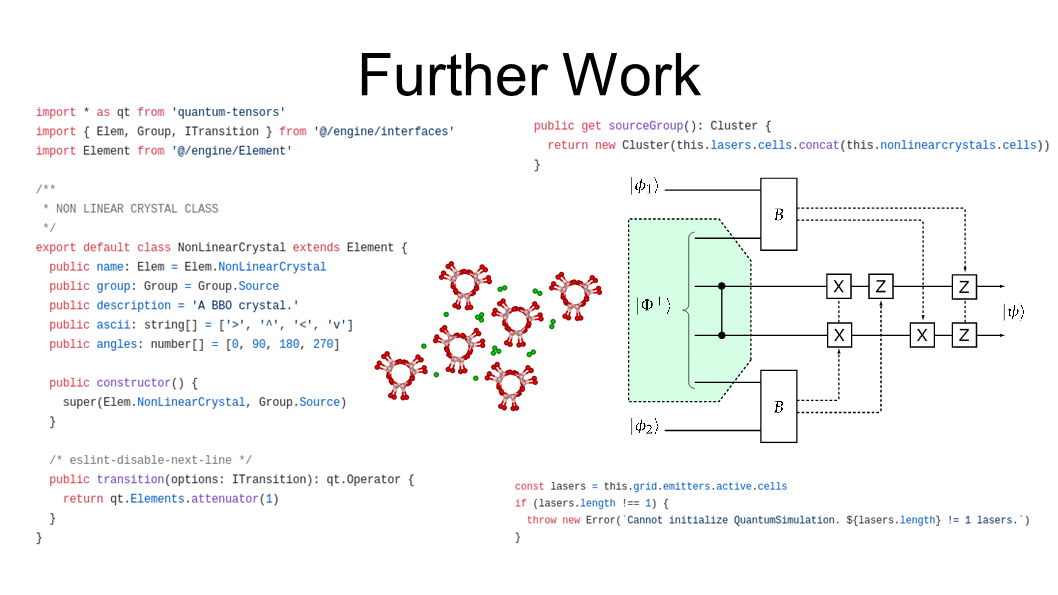 But wait: didn’t I say there was a lot of research into linear optical quantum computing? Indeed, there are several research groups that have created CNOT gates using linear optical components. However, these gates are not perfect and have a probability of succeeding. All in all, these approaches seemed to complicated to implement in Quantum Game. Nevertheless, it would be an interesting route to pursue further. The KLM scheme uses a quantum teleportation trick to allow gates to be repeated until success, which could be promising.

It turns out the new version of the game may actually have entanglement! There is a little bit of code in there for a non-linear crystal, specifically a barium-borate crystal. The crystal’s operation isn’t implemented yet, and it would have to be modeled as an additional photon source, so it’ll require further work before it’s available. 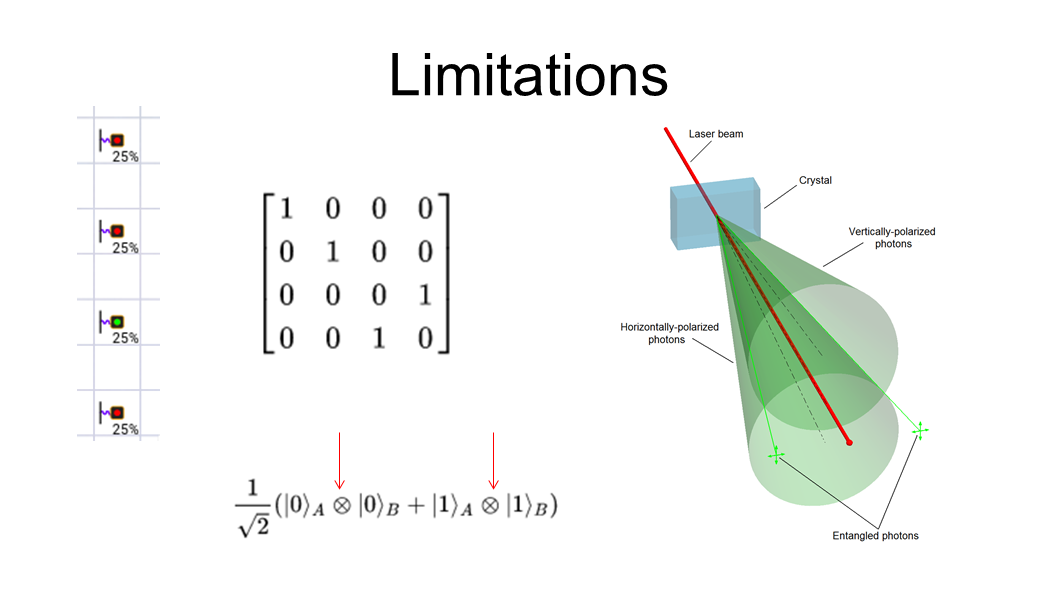 What about multiple qubits? Despite my efforts, I couldn’t produce a meaningful interaction with two qubits. In fact, I don’t think entanglement is possible given the available optical filters. I can represent two qubits as a four-state system, but this approach would require an exponential amount of states for more qubits. Also, there is only one photon to measure, so if I wanted to measure two qubits, I’d have to find a way to decompose them into four states, effectively performing a Tensor product. I’m pretty sure this is impossible because it’s a linear optical system. Generally, entangled states are produced by non-linear crystals, and I don’t have any of those. 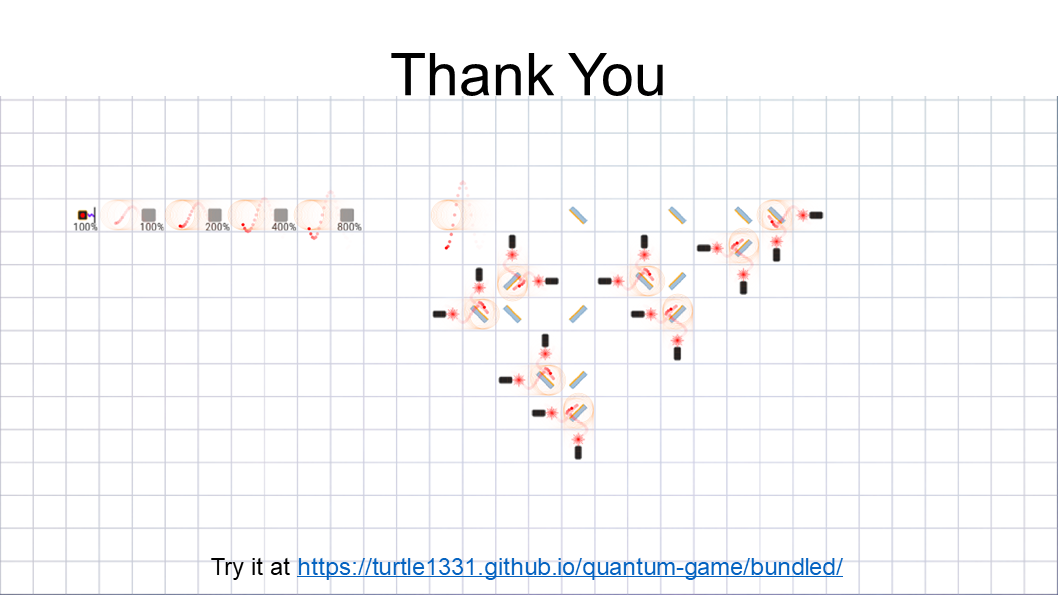 Try it at https://turtle1331.github.io/quantum-game/bundled/ Thank you for your attention! Any questions?